10 unmissable things to do in ronda

Perched on the precipice of the El Tajo canyon and nestled in the mountainous region between Málaga, Cádiz, and Seville, lies Ronda, Spain’s ‘city of dreams’. With the natural beauty of its location and the architectural and historical significance of some of its attractions and monuments, it’s little wonder that Ronda has been the inspiration for writers such as George Eliot, Ernest Hemingway, and Orson Welles throughout the years.

Ideally located less than 90 minutes from Andalucía’s gateway airport of Málaga, Ronda is a popular visit for those exploring the gems of Southern Spain.

Note, Ronda is also famous as the place where modern bullfighting was born, and it has a truly spectacular bullring from an architectural point of view. However, I don’t agree at all with bullfighting, and this is therefore omitted from my favourite things to do in the city.

Somewhat unfittingly named, the Puente Nuevo, or New Bridge, is one of the biggest draws to the city, and was actually constructed between 1759 and 1793, spanning the 120-metre gorge that splits the city in two. The fact that it is called the new bridge is in contrast to the Puente Viejo (Old Bridge) which was constructed in the early 17th Century, and with the Puente Romano makes up the three famous bridges of the city.

The eagle-eyed admirers will be able to spot a small chamber on the side of the Puente Nuevo, which was reportedly used as a prison and torture chamber during the Spanish civil war in the 1930s. Thankfully, this now only houses an exhibition that details the bridge’s construction and historical importance, however it has also been used as a bar in the past.

The views from the Puente Nuevo itself are spectacular, and you are likely to cross the bridge several times as you meander through the city, however the most iconic view is towards that of the bridge itself from the Puente Nuevo viewpoint. To find this, head South over the bridge and down Calle Tenorio until you find the small path just before the El Morabito restaurant. Follow this winding path downwards until you find the viewpoint on the right-hand side. 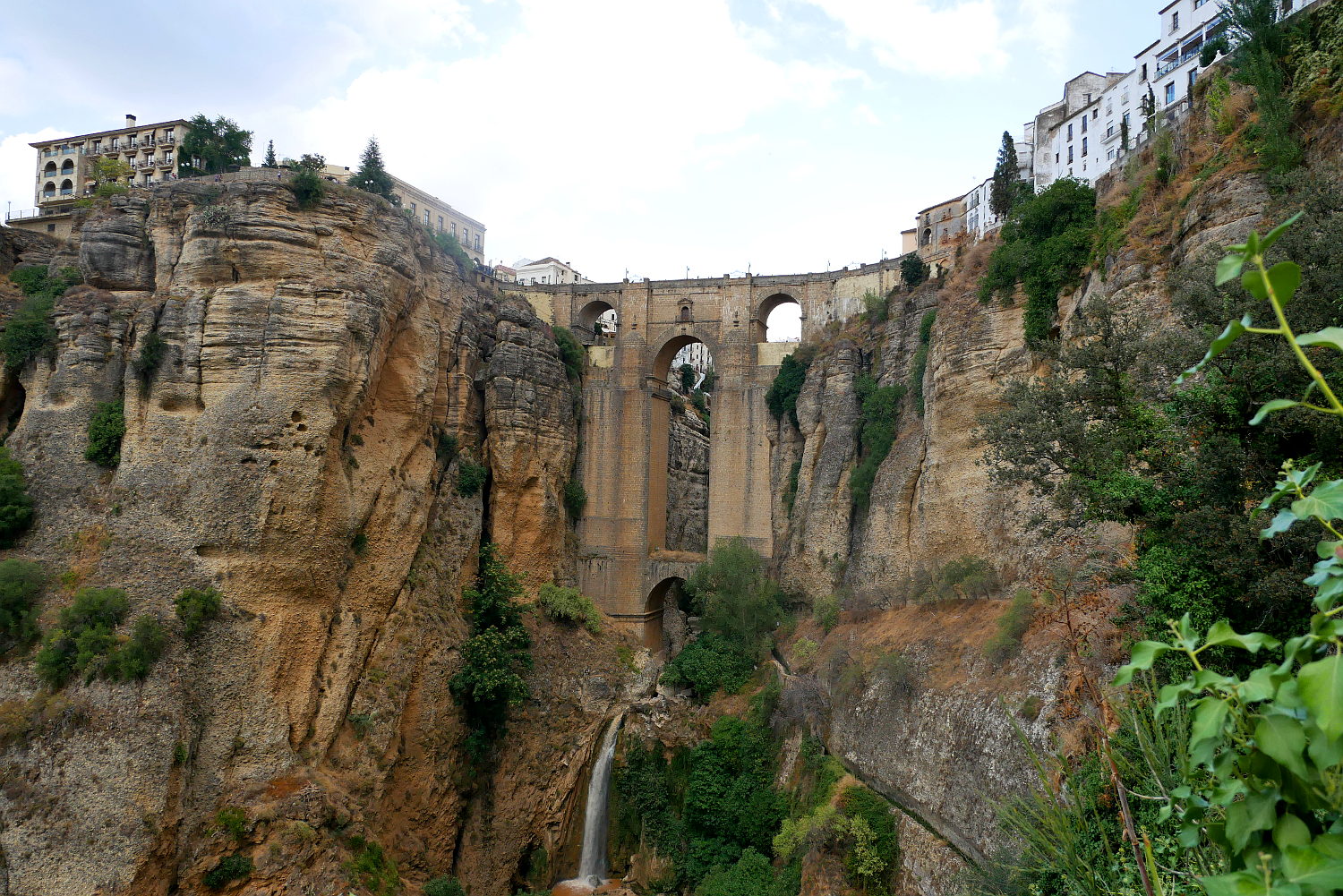 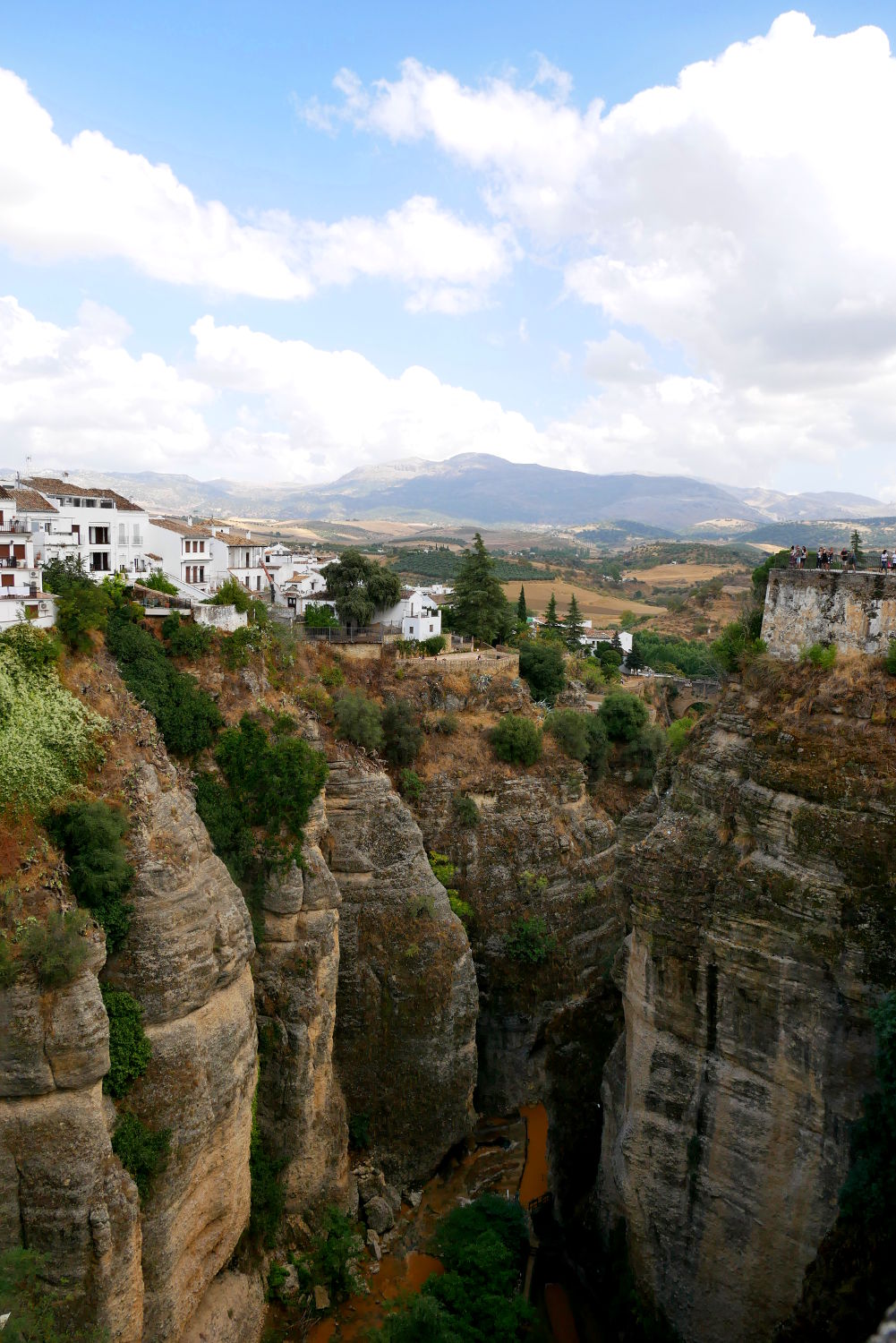 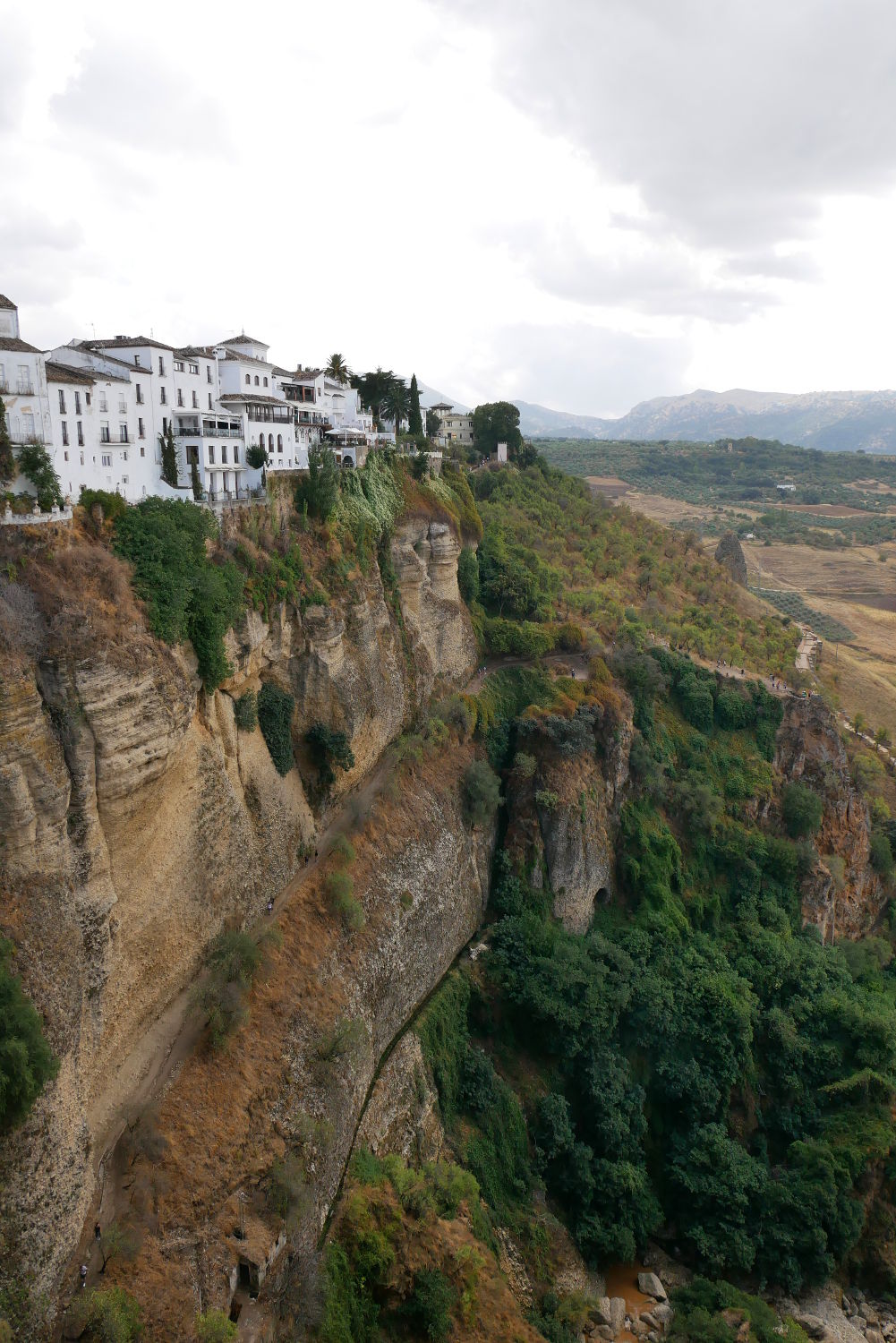 As with much of Andalucía, Ronda boasts unmistakable signs of the Muslim rule that dominated the region up to the 15th Century. Ronda’s Baños Arabes are some of the best-preserved examples of Arab Baths along the whole of the Iberian Peninsula.

Costing around €3.50 for entrance, the admission includes a short video of the baths that shows how they would have been used in their history. Once inside, you can appreciate the entire structure that was built partially underground, including the hot, warm, and cold rooms, spectacular arches and columns, and skylights in the roof. 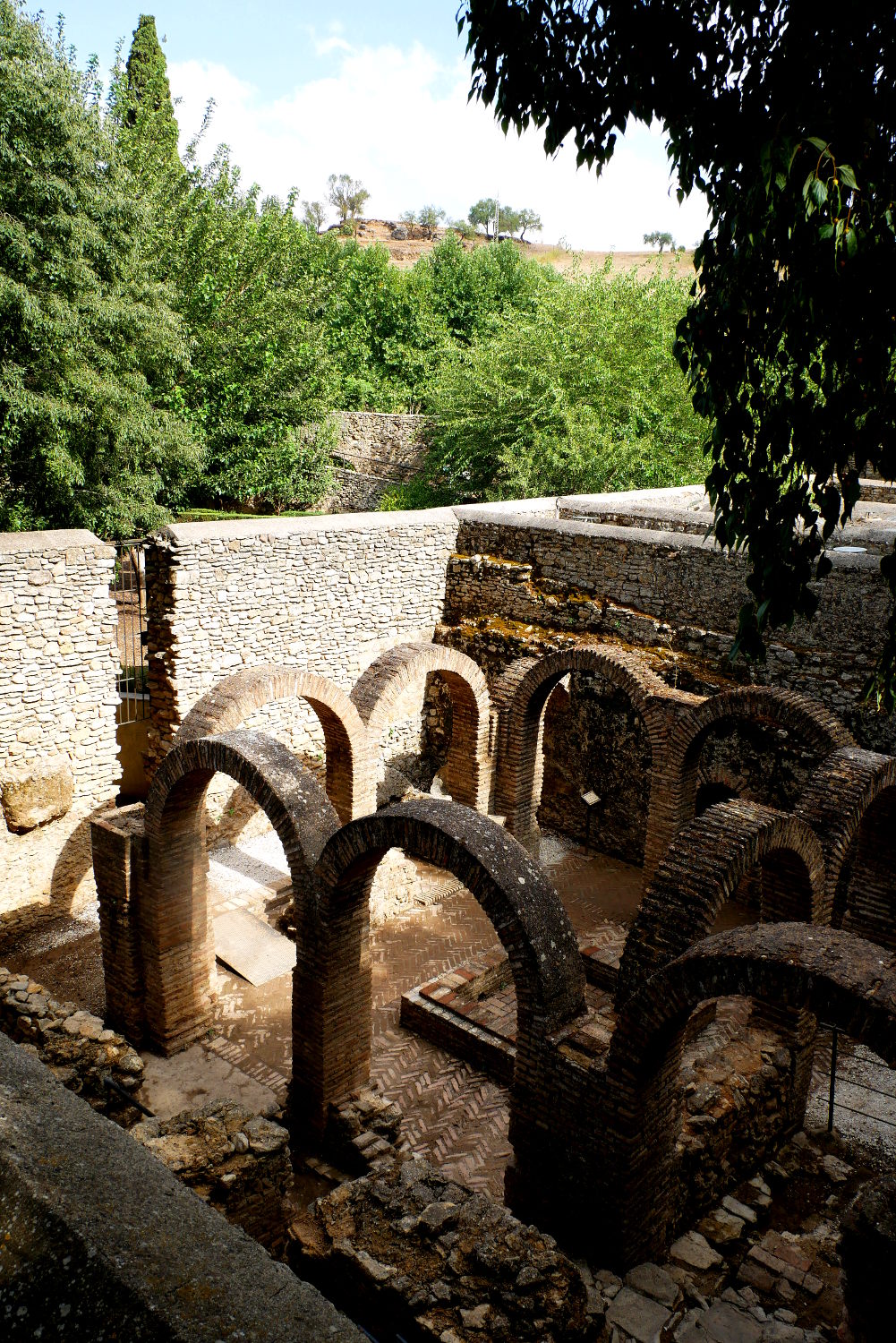 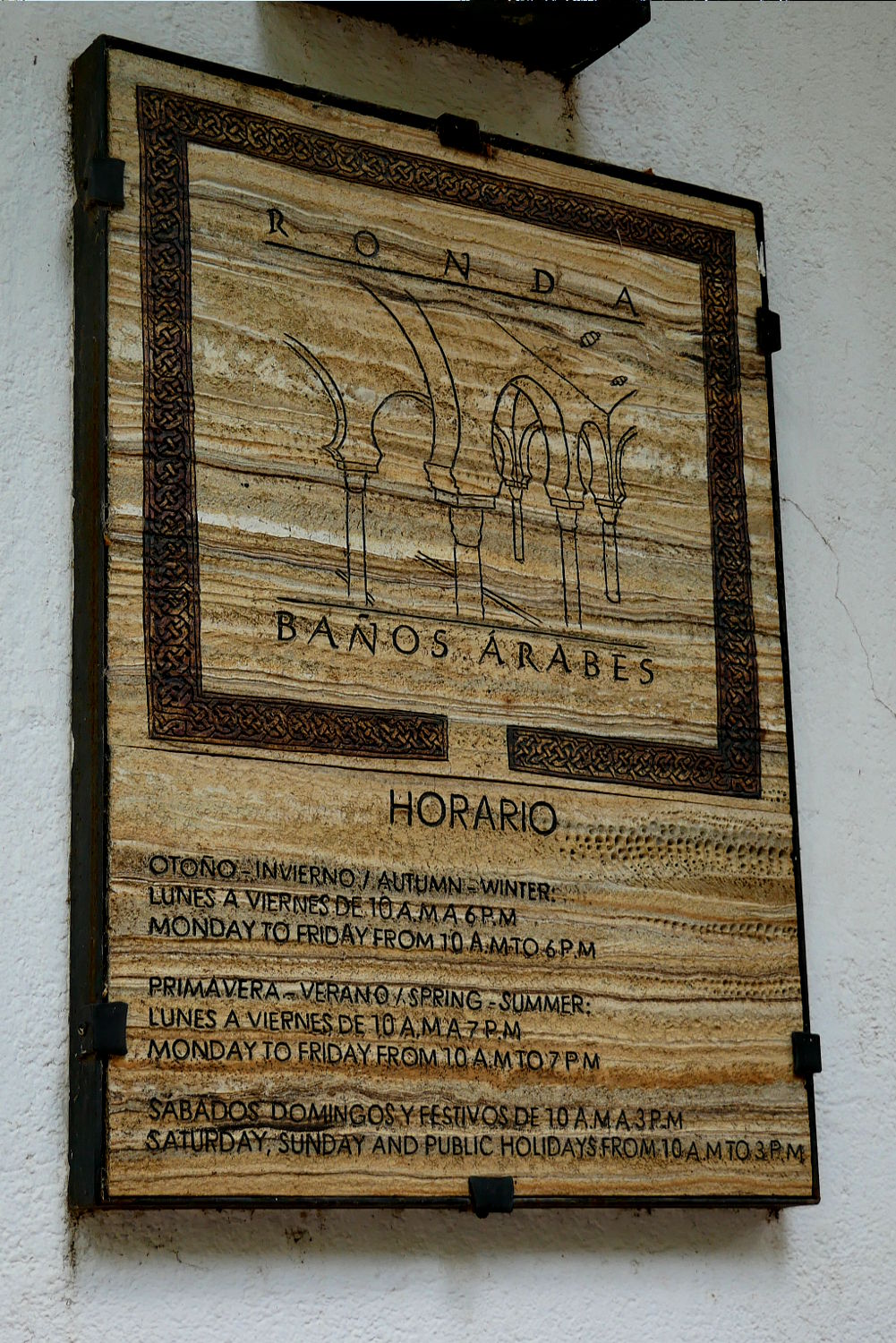 On the North side of the Puente Nuevo lies Ronda’s bustling Plaza España. The cobbled square is dominated on one side by the luxurious Parador de Ronda, with shops, an ice cream stall, and unfortunately a McDonald’s around the rest. Head down any of the side streets to find a number of bars and restaurants to enjoy.

Mondragón Palace is arguably one of Ronda’s most famous buildings. In contrast to La Casa del Rey Moro (House of the Moorish King) which never actually housed a Moorish King and was built after the Moorish empire had fallen, Mondragón Palace was reportedly built for the sultan of Morocco Abul Asan’s son Abbel Mallek who presided briefly over what was Moorish Ronda’s golden age.

Though originating in Moorish Spain, the majority of renovation and construction took place under Christian rule. Inside you can explore the palace’s rooms and architecture of Spain throughout the years, including Renaissance, Gothic, and Mudejar; the gorgeous courtyards, patios and gardens; as well as the Municipal Museum of Ronda housed inside the palace that documents Ronda’s history from the Stone Age to present.

La Casa del Rey Moro, despite never having housed a Moorish King and being built some time after the Moorish kingdom in Spain fell, does have a unique and important story to tell of Moorish rule of Ronda. The house sits above a water mine built in the 14th Century when Ronda was in the firing line between Moorish Granada and Christian Seville. As most besieged cities had water supplies targeted, the Moorish king of Ronda, Abell Mallek ordered a water mine to be cut directly into the gorge to be able to access water directly from the river below.

Nowadays, you can access the house, the gardens that were constructed in 1912 by the famous French landscape artist Jean Nicolas Forestier, as well as the 300 steps that lead down into the water mine which pass through a number of interesting rooms and chambers.

Located just North of the Puente Nuevo lies Alameda del tajo, a quant tree-lined park leading to balconies that offer breathtaking panoramic views across the gorge. I recommend any visitors heading to Ronda to make their way here with a book or just to enjoy people watching, as the park is frequented by locals and tourists alike. 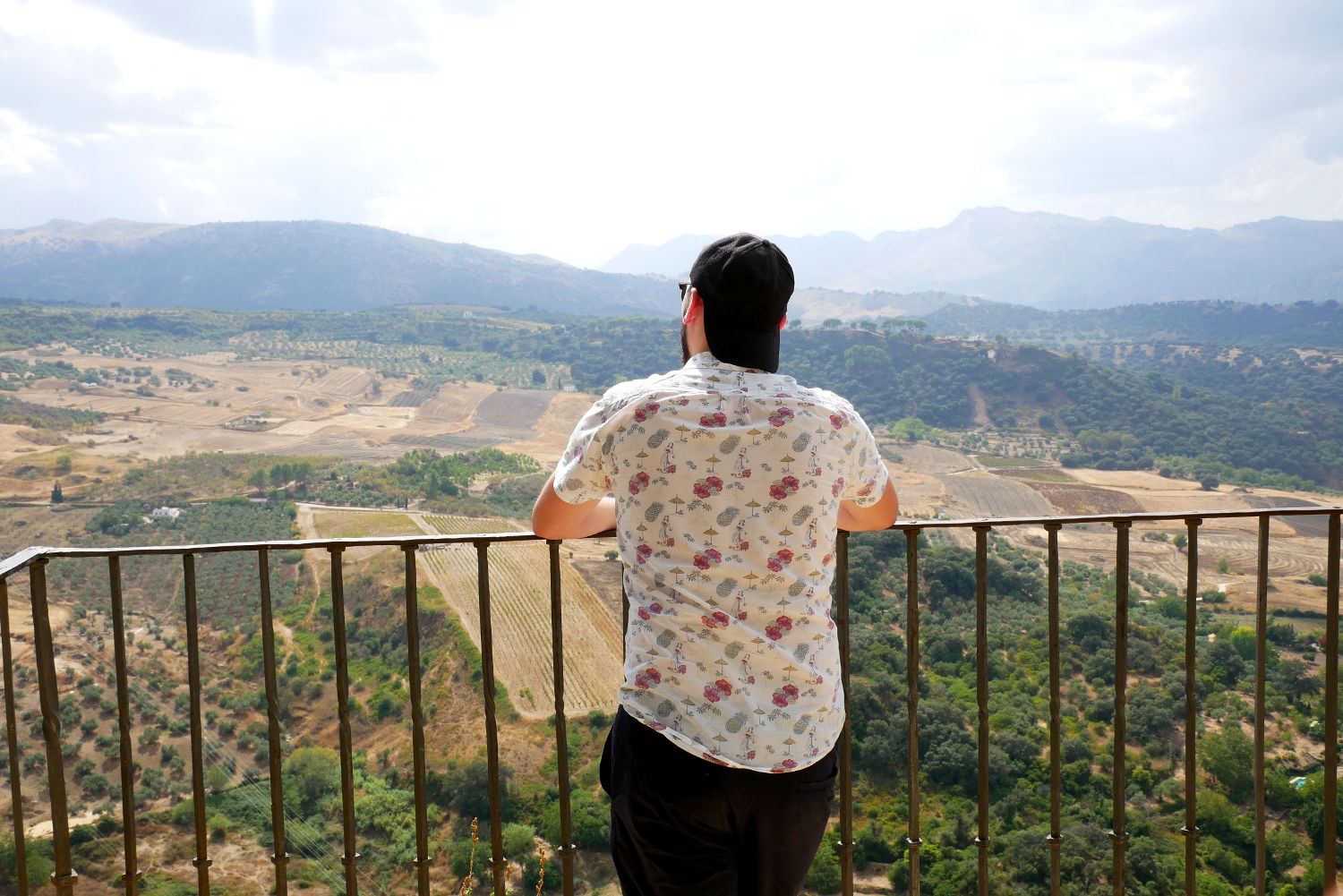 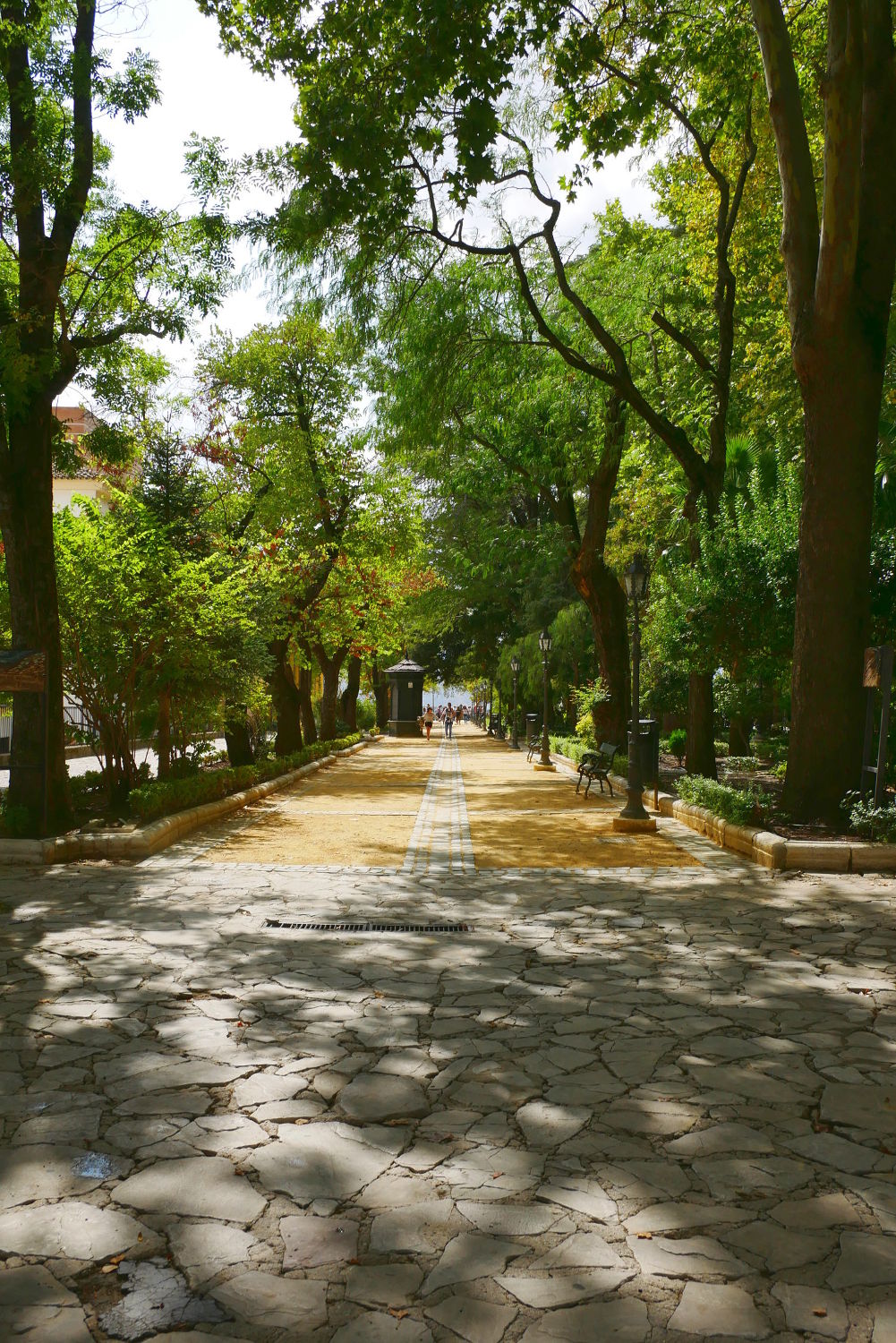 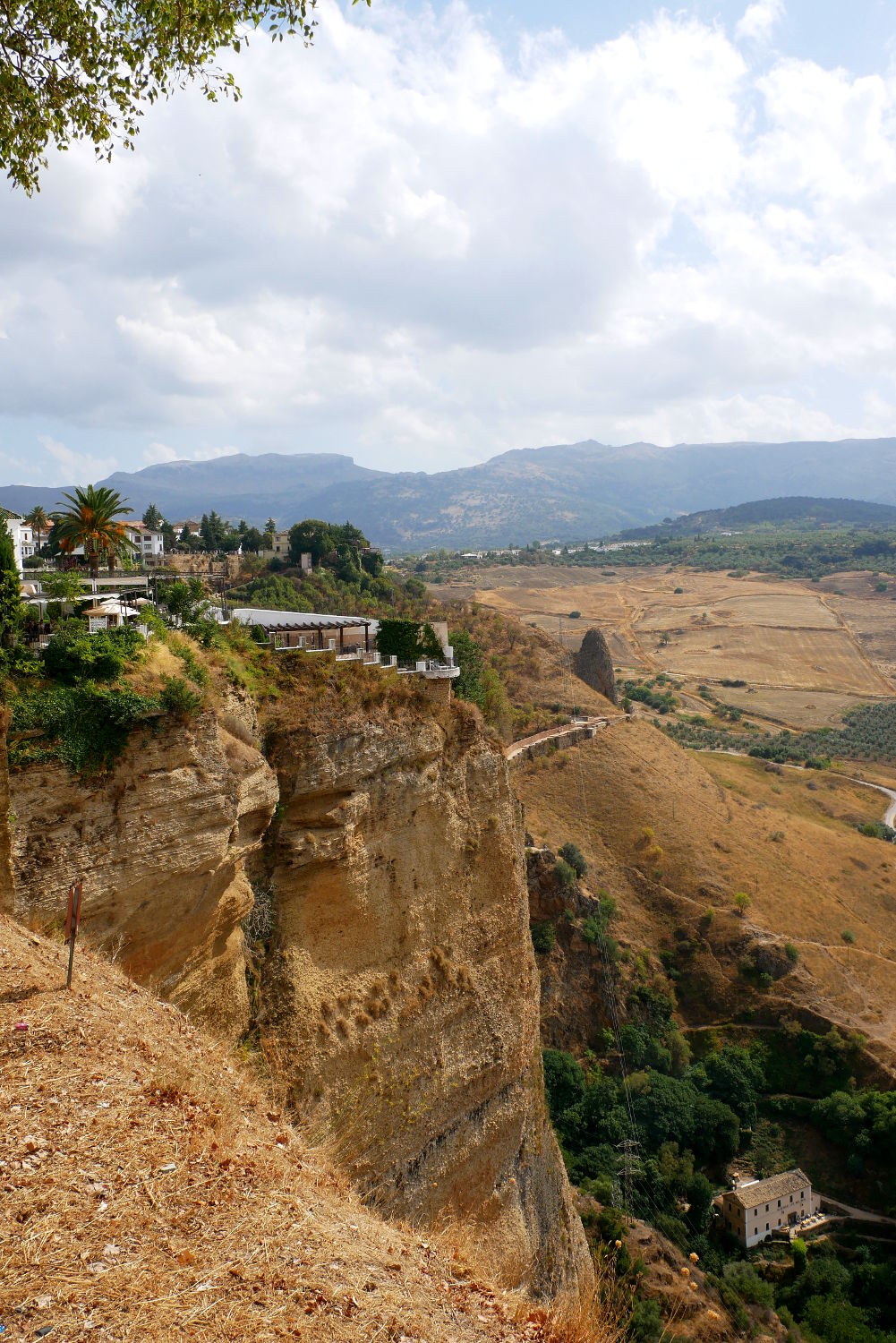 Built in the 13th Century, the Puerta de Almocábar is another remnant of Moorish Ronda. The colossal, impressive gates served as the entrance to the fortress walls that made the city almost impenetrable. Enjoy the views over Ronda by heading up the towers and wandering along the ramparts. Alongside the Puerta de Almocábar you can also find the Puerta de Carlos V, added in the 16th Century and featuring King Charles V’s House of Hasburg family crest.

In the 18th, 19th and 20th Centuries, the mountainous region that surrounds Ronda was famous for something quite unexpected: banditry. Aiming to explore and preserve this interesting history is the Museo del Bandolero, a unique museum covering banditry in Andalucía and specifically the Serranía of Ronda.

Amongst almost 1400 items, the museum includes original documents and press archives from the time, books, weapons, images, and paintings that will help you discover some of the famous bandits of the time, including the Tragabuches, the Tempranillo, Diego Corrientes and more. 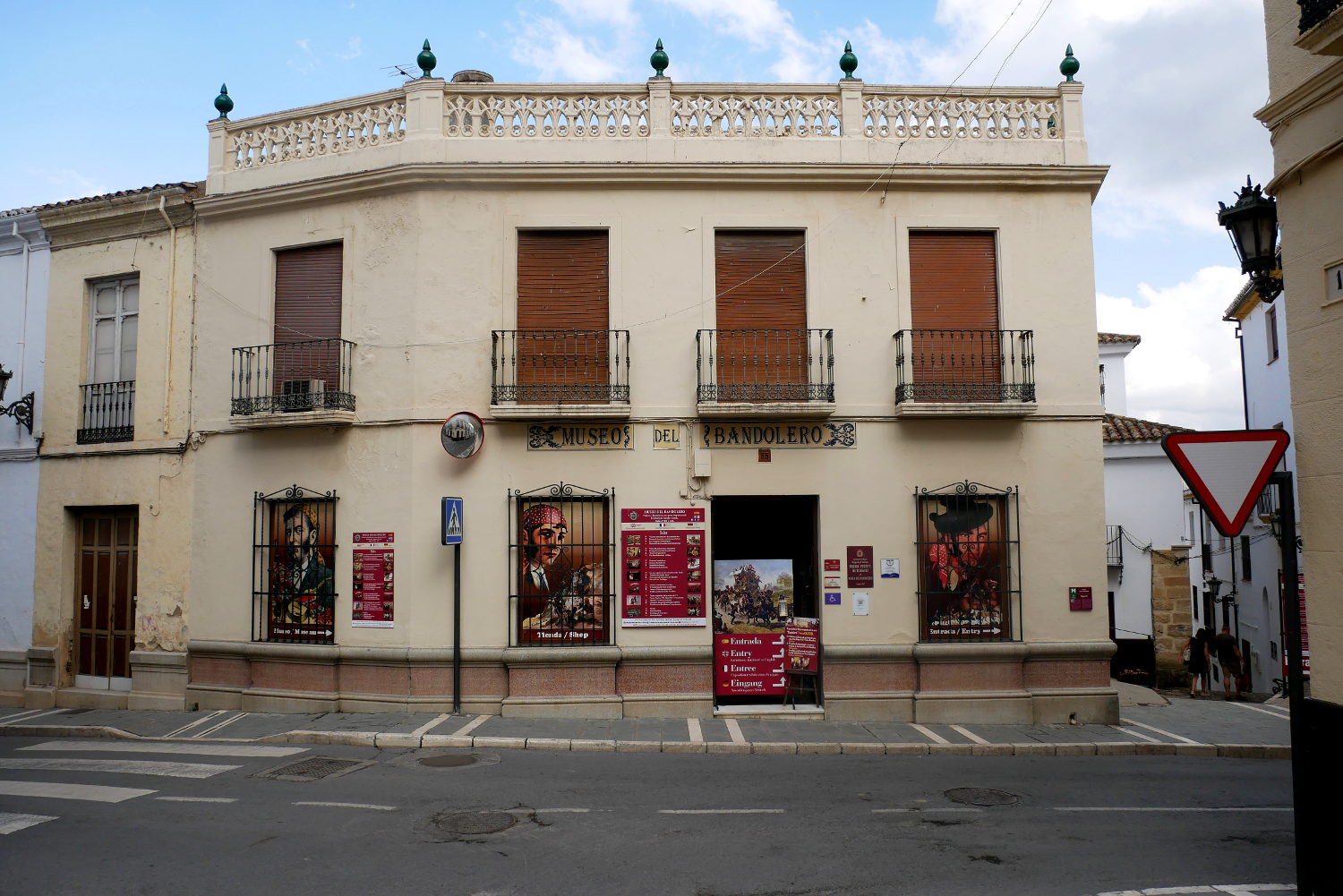 On the site of the city’s original mosque now lies Ronda’s largest Church: Iglesia de Santa María la Mayor. Built between the 15th and 17th Centuries, the Church displays a myriad of styles, including Gothic columns and arches; a Renaissance cedar and walnut two-level Choir; and the mosque’s original mihrab, the structure that indicates the direction of the Kaaba in Mecca.

Ideally located just 18km and 30 minutes North of Ronda lies the quaint town of Setenil de Las Bodegas. Certainly worth a visit during your stay in Ronda, portions of the city are built directly into the rockface creating unique rooves and walls for many of the cafés and tapas restaurants located along the popular Calle Cueves de Sol and Calle Cuevas de la Sombra. 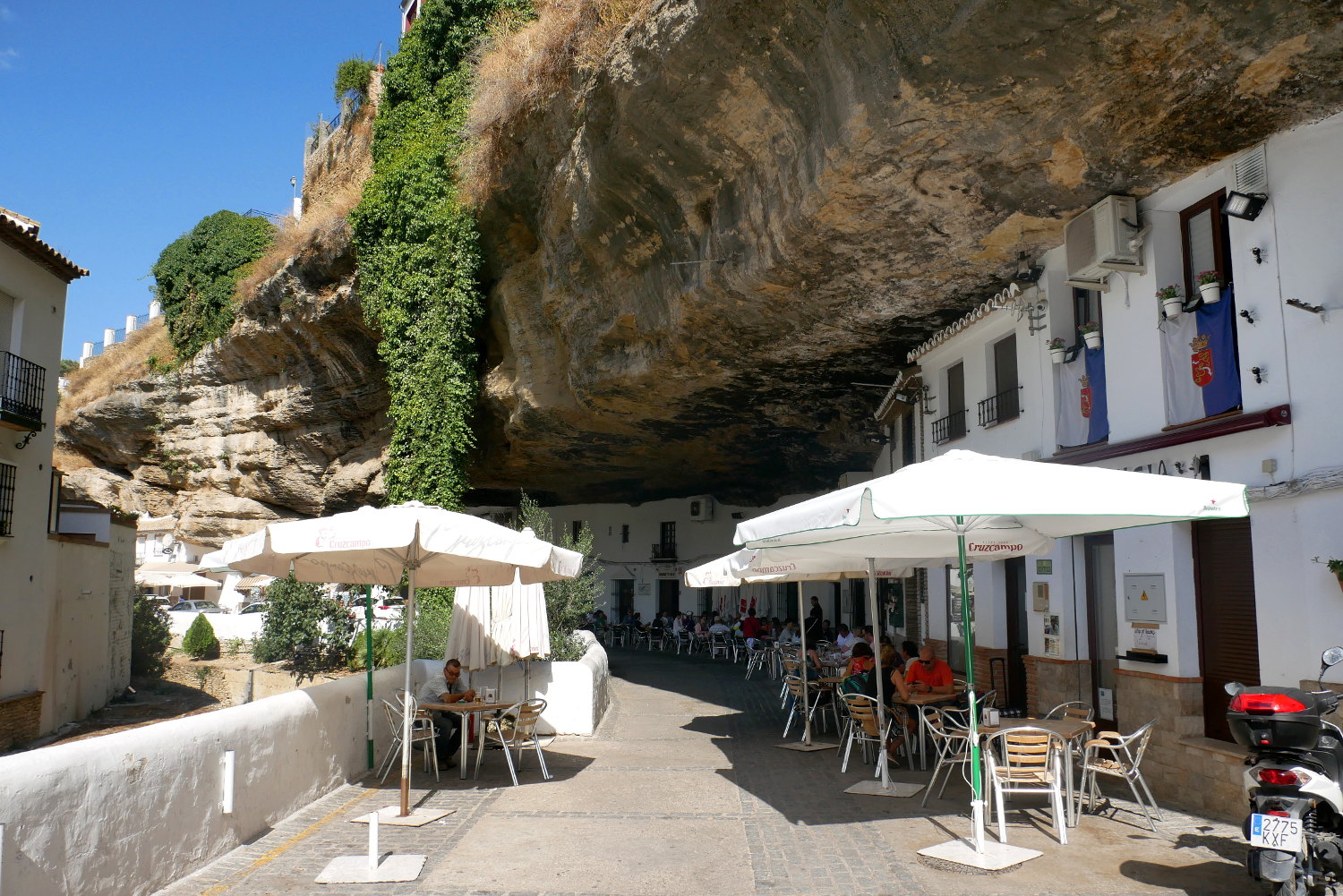 Bonus: Where to Stay in Ronda

For a luxurious stay in Ronda, the Parador de Ronda is the ultimate oasis in the heart of the city. Enviously located beside the Puente Nuevo in the historic Town Hall building, the hotel boasts bright, spacious rooms, luxurious gardens with a swimming pool, and most importantly offers breathtaking views across the El Tajo gorge.

For those looking for a cheaper stay, Camping El Sur is a popular and well-equipped campsite just 10-15 minutes south of the city centre, with plenty of space for camping, vans and motorhomes. 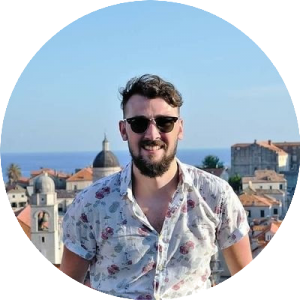 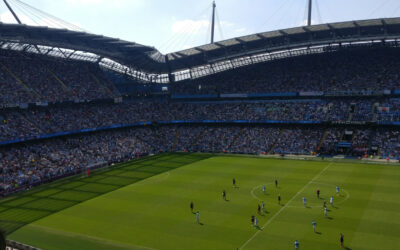 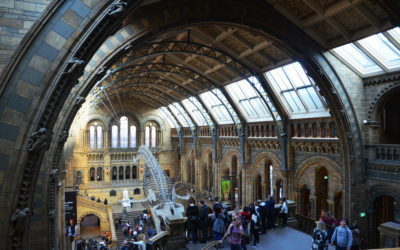 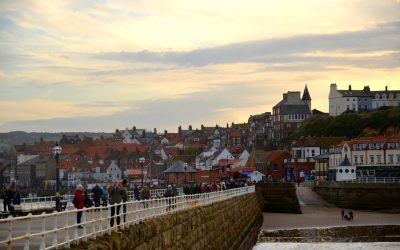 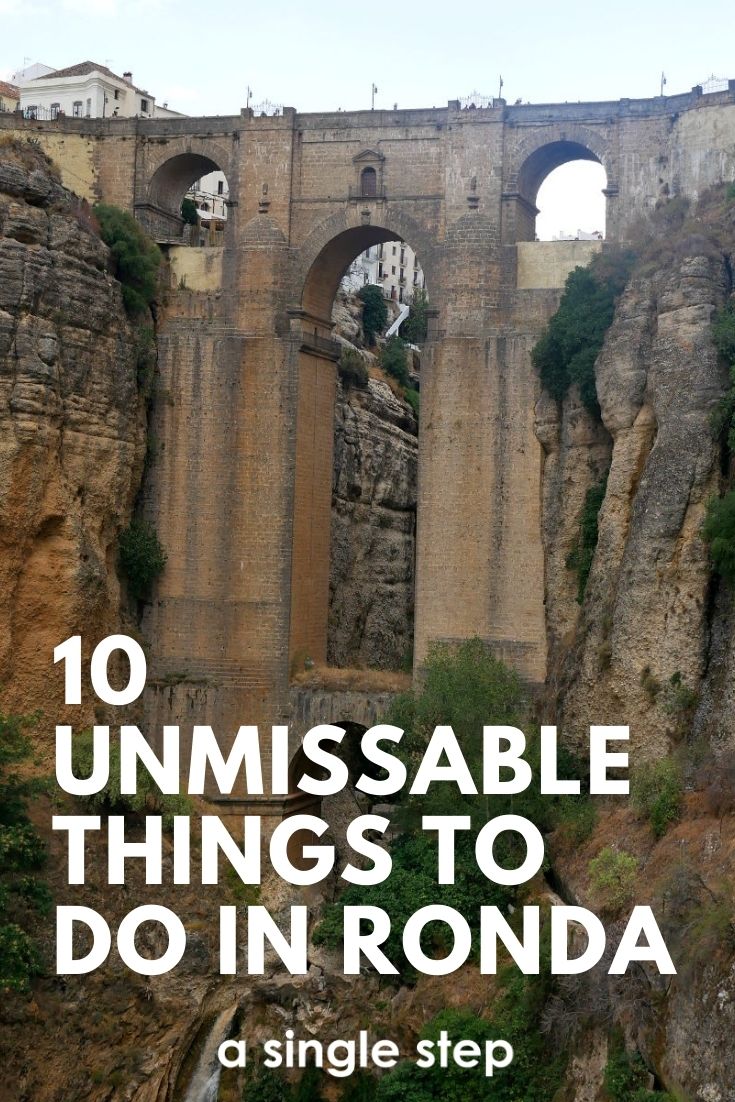